Skip Navigation
Home > Who We Are > People > Andrew Johnson 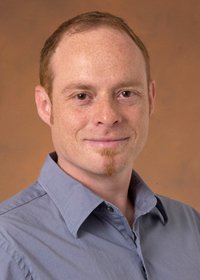 Dr. Andrew E. Johnson graduated with Highest Distinction from the University of Kansas in 1991 with a BS in Engineering Physics and a BS in Mathematics. In 1997, he received his Ph.D. from the Robotics Institute at Carnegie Mellon University where he developed the spin-image surface signature for object recognition and surface matching. Currently, he is a Principal Member of Technical Staff at the Jet Propulsion Laboratory where he is developing image-based techniques for autonomous navigation and mapping during descent to planets moons, comets and asteroids. At JPL, Dr. Johnson has worked on technology development tasks as well as flight projects. For the Mars Exploration Rover Project, Dr. Johnson was the lead algorithm developer for the Descent Image Motion Estimation Subsystem (DIMES), the first autonomous machine vision system used during planetary landing. Following the successful development and execution of DIMES, he is now moving back to the development of machine vision systems for landing hazard avoidance, pin-point landing and rover navigation. Part of this work includes a collaboration with the University of Southern California and the University of Minnesota in the area of vision guided safe and precise landing for autonomous helicopters. In 2003, Dr. Johnson was awarded the JPL Lew Allen Award for Excellence for "his "groundbreaking contributions in the area of machine vision algorithms for safe and precise landing."

Research
Designed and built a prototype acoustic source to be used in seismic mapping for oil recovery.