Skip Navigation
Home > Who We Are > People > Vandi Verma 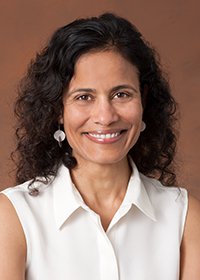 Vandi Verma is a JPL Principal Engineer and the Deputy Section Manager for the Mobility & Robotics section at the NASA Jet Propulsion Laboratory, California Institute of Technology. She also serves as Chief Engineer of Robotic Operations for Mars 2020. She was the Assistant Section Manager of the Mobility & Robotics section, the Supervisor of the Section Staff Group, and the Supervisor of the Operable Robotics Group.

Her areas of expertise include space robotics, autonomous robots, and robotic operations. She has worked on Robotics and AI research and technology development tasks and has deployed robots in the Arctic, Antarctica, and the Atacama Desert. She works on new robotics capabilities from research & development, mission design and prototyping, through flight development, testing and launch, to landing and surface operations.

Capabilities she has worked on are in regular use on Perseverance and Curiosity. She developed onboard robotic arm collision detection and autonomous robotic arm positioning on Perseverance, and autonomous science targeting on Perseverance and Curiosity. In addition to flight software onboard rovers, she has developed ground operations capabilities. She developed rapid flight software in the loop Surface Simulation (SSIM) for Curiosity. SSIM is used daily to simulate and verify spacecraft commanding on Curiosity and Perseverance. She is also the Principal Investigator of an Operations for Autonomy research task. She has been engaged in robotic operations on Mars since 2008 with the Mars Exploration Rovers Spirit and Opportunity, Curiosity rover, Perseverance rover, and Ingenuity helicopter.

Vandi led the Europa Lander Advanced Development Autonomy Prototyping team and led the team that originated MEXEC for multi-mission onboard planning and execution. It has been demonstrated in flight in the ASTERIA mission, in Europa Clipper and Europa Lander prototypes, and parts of it are in use in the Perseverance On-Board planner. Prior to joining JPL, at NASA Ames research center she led the team that originated the formally verifiable plan execution language PLEXIL and the development of technology that has been deployed on rovers and human spaceflight projects. She continues to work with external collaborators and student and faculty researchers at universities.

Vandi received her Ph.D. in Robotics from Carnegie Mellon University in 2005.

Autonomous robots, Onboard capabilities that reduce the need for ground-in-the-loop interaction