Skip Navigation
Home > Who We Are > People > Benjamin Morrell 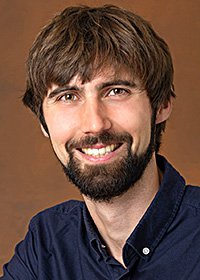 Benjamin Morrell is a Robotics Technologist at the NASA Jet Propulsion Laboratory (JPL), California Institute of Technology, where he works on autonomous navigation technology for robots flying, exploring underground and in space. He is the perception lead on team CoSTAR (costar.jpl.nasa.gov), a collaboration between JPL, MIT, and Caltech, that is competing in the DARPA Subterranean Challenge (subtchallenge.com). His perception team focuses on global localization and mapping, as well as the detection and location of objects of interest. Ben is also working on algorithms for the autonomous approach to small bodies (comets and asteroids), focusing on visual-based relative localization. Previous projects have also include robotic aerial inspection of the inside of oil tanks, supporting the development of software for an autonomous blimp, and surrogate drone for visual survey of tank walls.

Previously he worked at JPL as a Post-Doctoral researcher after completing an internship there during his PhD which included work on high-speed autonomous flight of quadrotors. He completed his PhD at the University of Sydney in the School of Aerospace Mechanical and Mechatronic Engineering. In 2015, he was fortunate to receive the Australia to USA, American Australian Association Fellowship to support a year of study at Texas A&M University, as part of his PhD research. Ben’s PhD thesis was focusing on autonomous navigation for aerial and space-based robots, considering localization, mapping, trajectory planning, and control. Ben completed his Bachelor’s of Aeronautical (Space) Engineering at the University of Sydney in 2013, graduating with the University Medal.

In addition to his core research, Ben has been involved in a range of activities including 3D printing in Mars Mission Simulations, international drone control, and coordinating the Zero Robotics (zerorobotics.mit.edu) competition in Australia, where high school students get the opportunity to send their code to the International Space Station. While Chair of the American Institute of Aeronautics and Astronautics (AIAA) Sydney Section in 2017, Ben co-led the organization of an Australia-wide tour of astronauts (Astronaut Stories Australia) prior to the International Astronautical Congress.

Ben is a motivated actor in trying to connect Australian students, researchers, and entrepreneurs with opportunities, expertise, and experience in the US space industry.