Skip Navigation
Home > What We Do > Research Tasks > Telerobot Testbed 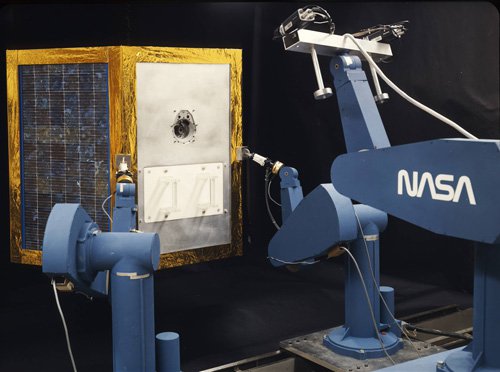 The JPL Telerobot Testbed, circa 1989. Shown are three semi-autonomous robot arms: two with custom end effectors used to capture and service a slowly spinning satellite mockup on the left, and one with a vision system tracking the satellite. Not shown is the operator control station with remote visual displays and dual force-reflecting hand controllers for teleoperation of the system.
The Telerobot Testbed is an integrated robotic system used to develop, implement, and evaluate the performance of advanced concepts in autonomous, tele-autonomous, and tele-operated control of robotic manipulators. Using the Telerobot Testbed, researchers demonstrated several of the capabilities and technological advances in the control and integration of robotic systems which have been under development at JPL for several years. In particular, the Telerobot Testbed was recently employed to perform a near completely automated, end-to-end, satellite grapple and repair sequence.
Point of Contact: J. (Bob) Balaram
Sponsored By: NASA Office of Aeronautics and Space Technology (Code R)