Artists concept of helicopter operations on Mars.
The Mars Science Helicopter (MSH) task is the next evolutionary step for Martian rotorcraft at JPL. The key focus is to develop the technology needed to deploy science payloads (0.5kg - 2kg) on rotorcraft platforms at the surface of Mars. MSH will inherit many of the technologies created by the Mars Helicopter Technology Demonstrator (MHTD) baselined for Mars 2020, and extend capabilities in order to enable a new class of mesoscale planetary access across Mars.

Designing and proving how science payloads can be deployed, recovered, integrated, and operated on a dynamically and computationally representative rotorcraft will be critical in expanding a new frontier for Martian scientific exploration.

The focus will include: 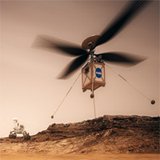