Skip Navigation
Home > Who We Are > People > Shreyansh Daftry 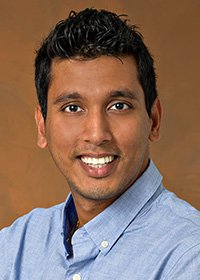 Shreyansh Daftry is a Group Leader and Robotics Technologist in the Perception Systems group at NASA Jet Propulsion Laboratory (JPL), working at the intersection of Artificial Intelligence (AI) and Space Technology to help develop the next generation of autonomous robots for Earth, Moon, Mars and beyond. Prior to joining JPL, he received his M.S. degree in AI and Robotics from the Robotics Institute, Carnegie Mellon University, and his B.S. degree in Electronics and Communication Engineering from Manipal University, India.

At JPL, he currently serves as the Chief Engineer on LunarNav - a NASA Game Changing Development (GCD) project developing advanced navigation algorithms for lunar rovers, works on the Mars Sample Return mission, and has led/contributed to several technology development efforts for autonomous navigation of ground, airborne and subterranean robots. Shreyansh has received numerous awards and honors, including the NASA Space Act Award and the JPL Software of the Year award, for his technical contributions to Mars exploration.