Skip Navigation
Home > Who We Are > People > Matthew Heverly 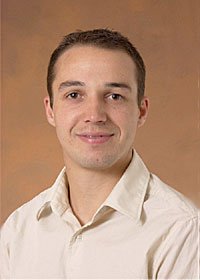 In 1999 Matt received his bachelors degree in Mechanical Engineering from Cal Poly, San Luis Obispo. That same year he joined an industrial aerospace company in Pasadena (Alliance Spacesystems Inc.) where he worked on several R&D as well as space flight robotic hardware projects.
In 2003 Matt left ASI to pursue a masters degree in controls from Boston University. Matts research at BU focused on medical applications of robotics, specifically for prenatal heart surgery.
In the spring of 2005 Matt joined the Robotic Hardware Systems group at JPL. From 2005 - 2010 Matt was the chief mechanical engineer for the ATHLETE hex legged rover. During this time Matt was also working on surface operations for the Mars Exploration Rovers as a Rover Planner sending tactical mobility and IDD commands to drive the rovers and operate their robotic arms on the surface of Mars.
Matt is currently the mobility systems engineer for the Mars Science Laboratory (MSL) rover. In this role he works with the mobility hardware and software development teams to ensure the vehicle will properly operate once it reaches the surface of Mars.
Matt is also a faculty member at the California Institute of Technology (Caltech) and teaches a class in mechanical engineering design.

Mechanical design and control of robotic systems and mechanisms