Skip Navigation
Home > Who We Are > People > Jeffrey Edlund 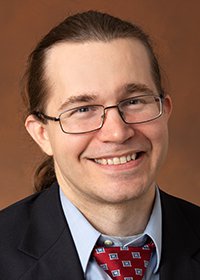 Jeffrey A. Edlund is currently the communications lead for JPLs DARPA Subterranean challenge team which won a 2nd place trophy in
August 2019. He is also helping to develop simulation tools for Mars 2020. He received his Ph.D. in Computation and Neural Systems and a B.S. in Physics from Caltech in 2019 and 2004 respectively. He began his career working part-time at the Center for Advanced Computing Research (CACR) at Caltech, building and maintaining Beowulf supercomputing clusters. As an undergraduate he worked on data analysis algorithms for the Laser Interferometric Gravitational Observatory (LIGO). Upon completion of his undergraduate work in 2003, he joined JPL section 3266 to develop a simulation of the galactic gravitational background in Laser Interferometer Space Antenna (LISA) data. He returned to Caltech to work with Dr. Adami and Dr. Burdick as a graduate student in the Computation and Neural Science (CNS) program. There he collaborated with JPL on the development of the Axel II and III rovers (leading to US Patent 8,496,077 B2). He also studied evolving developmental neural networks, information integration in stochastic logic networks, EMG data analysis, and epidural electrostimulation of spinal cords. His Ph.D. thesis was titled: "Numerical investigation of spinal neuron facilitation with multi-electrode epidural stimulation."