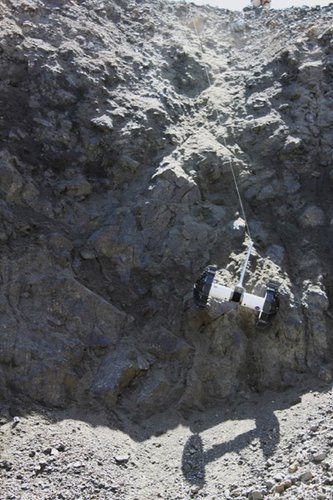 The Axel Rove descends a cliff while suspended from a tether.
Some of the most appealing science targets for future exploration missions in our solar system lie in terrains that are inaccessible to state-of-the-art rovers. JPL, in collaboration with Caltech, is developing the Axel family of rovers to access and sample extreme terrains such as craters, canyons, caves, fissures and cold traps.

The Axel rover is a tethered robot capable of rappelling down steep slopes and traversing rocky terrain. It is conceptualized as a mobile daughter-ship that could be hosted on different mother-ships such as static landers, larger rovers, or dual-Axel systems, thereby enabling a diverse set of missions.

In prior work, the team has demonstrated the ability of the Axel rovers to traverse to and explore extreme terrains, such as canyons with nearly vertical slopes, and acquire measurements from such surfaces. These prior experiments have relied on tele-operation by an operator with a bird’s-eye view of the system and the terrain. The objective of current research is to develop and demonstrate the autonomous control and operation of the Axel rovers in extreme environments under realistic mission-like constraints of remote planetary exploration.

The expected deliverable is a field demonstration of a mission realistic exploration scenario in an extreme terrain. The scientist will develop a science-driven mission plan, which may include traversing to an extreme topography such as a canyon, descending, collecting data along layered strata, and returning to the top, and then driving to a new location to explore another transect. Such scenarios will be developed using only rover telemetry and/or simulated orbital data and without the benefit of a bird’s-eye view of the robot.

This research is funded by the JPL RTD program and Caltech Keck Institute for Space Studies.
Point of Contact: Issa Nesnas
Sponsored By: Research and Technology Development Program