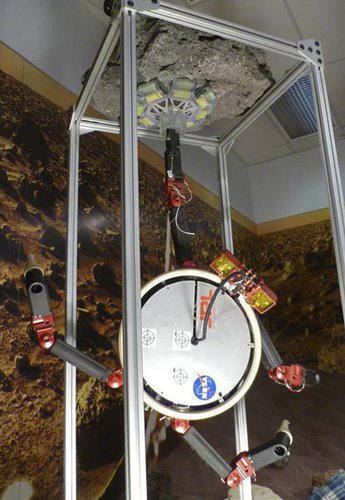 The gripping foot system supports the Lemur IIB robot as it hangs from a vesicular basalt rock slab.
An array of carriages conform to cm scale roughness with each carriage housing ten to twelve microspines that conform to mm scale roughness. Prototypes have been tested on vesicular basalt and rough lava rock supporting forces in all directions away from the rock. A selectively compliant ankle was built to interface these anchors to the Lemur IIB robot for climbing trials. A rotary percussive drill was integrated into one anchor, demonstrating self contained rock coring insensitive to orientation to gravity.

A second implementation of the anchor was constructed using the principles of microspine attachment (independent conformation, load sharing, opportunistic attachment via drag over a rough surface), but using metal spring elements and containerizing the mechanism within a central housing. This version does not rely on elastomeric polymers that are unsuitable for the very cold temperatures of space. It also shields the compliant mechanisms from debris and secures moving parts within a protected shell.