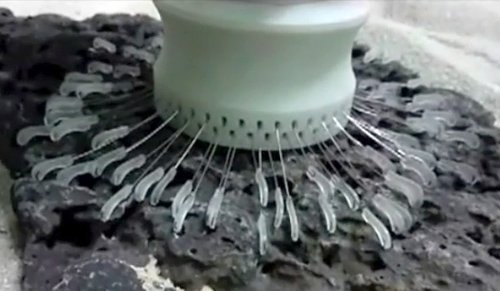 The video presents microspine-based anchors being developed for gripping rocks on the surfaces of comets and asteroids, or for use on cliff faces and lava tubes on Mars. Two types of anchor prototypes are shown on supporting forces in all directions away from the rock; greater than 160 N tangent, greater than 150 N at 45 degrees, and greater than 180 N normal to the surface of the rock. A compliant robotic ankle with two active degrees of freedom interfaces these anchors to the Lemur IIB robot for future climbing trials. Finally, a rotary percussive drill is shown coring into rock regardless of gravitational orientation. As a harderthan-zero-g proof of concept, inverted drilling was performed creating 20mm diameter boreholes 83 mm deep in vesicular basalt samples while retaining 12 mm diameter rock cores in 3-6 pieces. (ICRA 2012 Best Video Award Finalist)