Skip Navigation
Home > Who We Are > People > Daniel Clouse 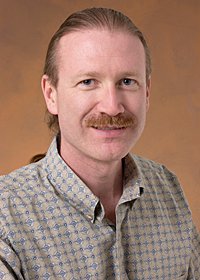 Daniel Clouse finished his BA in Computer Science from UC Berkeley in 1982. He worked at NCR Corporation, Systems Engineering, San Diego from 1982 to 1992 as a Principal Programmer / Analyst in the Programming Languages Department. He designed and developed a number of code generators and run-time systems on Unix 486 platform for C++, COBOL, NCRL, Ada. As a project leader, he supervised 4 programmers, and received 2 technical
merit awards.

He finished his PhD in Cognitive Science and Computer Science at UC San Diego in 1998. His PhD dissertation uses recurrent neural networks and statistics derived from large text corpora to model human performance on finding the meanings of words.

He has been employed at the Jet Propulsion Laboratory in the Mobility and Robotic Systems Section since 1999. Highlights of his career at JPL include:

- The 2003 "Driving on Slopes" task which produced an algorithm to allow rovers to deal with slippage while driving on sloped surfaces. He was responsible for the implementation of forward and inverse kinematics, for continuous real-time control of steering and driving of the 6 steerable wheel locomotion system, and for collection, interpretation, and reaction to real-time sensor data including stereo cameras, IMU, and joint angles.

- The Aerobot task (2006 - 2011). He designed and implemented software for control of the 11 meter Titan Testbed airship. The software performed data collection, and real-time telemetry for all sensors (GPS, IMU, compass, laser altimeter, barometric altimeter, anemometer, navigation and science cameras); state estimation, and navigation via either waypoint following, or GPS-denied visual servoing. He was in charge of all autonomous flight control for 10 field tests.

- Angelfire / Blue Devil (2007 - 2013). He implemented software for use in real-time surveillance using a multi-camera array mounted on an aircraft. Functionality included fine calibration of the camera array, and the real-time, multi-processor algorithm for tracking of features between frames of the very large images. This feature tracking forms the basis for image stabilization, DEM generation, and geo-registration. The software was used daily in theatre by U.S. Marines and others.

- LVS (2009 - 2020). Development, validation, and final flight code for Lander Vision System for use in entry, descent, landing of Mars 2020. Responsible for all image processing code. This system matches features in descent imagery to an onboard map to allow for more accurate spacecraft localization.