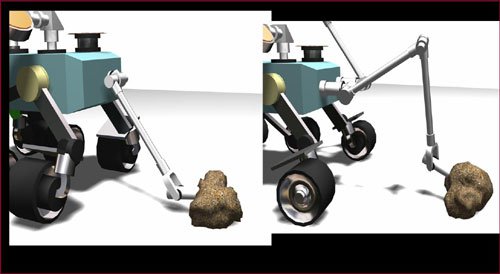 Evaluation of different robot designs for overall mission objectives. 2 DOF manipulator utilizing degrees of freedom of base to accomplish drilling task (left). 5 DOF manipulator capable of accomplishing task without requiring base movement (right).
This task will develop technology to enable the three degrees-of-freedom (DOFs) of rover mobility to be utilized in rover-based manipulator activities. The technology will be used to enable core sample acquisition from a low-mass rover. The technology will be valuable to future low-mass rover missions such as to the moon or mars. Specifically, the technology is anticipated to be valuable to the Mars Sample Return (MSR) mission if it proceeds with the current baseline plan of utilizing a small "fetch" rover to acquire rock core and regolith samples and return them to a lander-based mars ascent vehicle.

The three DOFs of rover mobility are the position of the rover on the terrain and the rover heading, together making up the three DOF rover pose. Active suspension provides additional rover mobility DOFs. The current state of the art in planetary manipulation considers the rover as a gross positioning stationary platform. Earth-based operators plan a path for the rover to place it such that in a subsequent uplink command sequence an arm motion can be specified to place an instrument or tool on a specified target. The arm must then have sufficient DOFs to place the instrument or tool since the rover is assumed stationary. Also, the rover must be massive enough to act as a stable platform for the arm-based activity.

This proposed effort will be performed as a collaboration between the Robotics Laboratory at Stanford University and the Mobility and Robotic Systems Section at JPL. Experimental validation will be conducted at JPL and use its facilities. While JPL and Stanford will collaborate in all aspects of the task, JPL will focus on rover-tool designs and controls implementation and Stanford will focus on dynamics analysis and controls analysis.
Point of Contact: Paul Backes
Sponsored By: Mars Technology Program

Coring From a Low Mass Rover