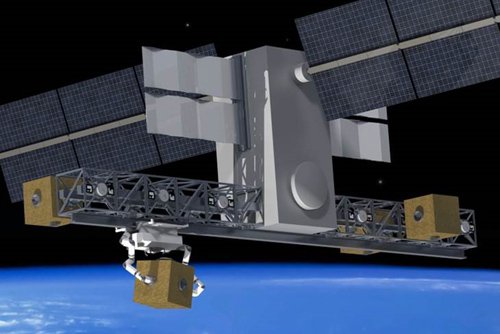 An artists conception of the orbital Science Station.
This resarch is addressing the formulation and technology development for a new observing system paradigm, called the Science Station. Science Station is notionally a commercially available GEO communications spacecraft retrofitted with two long deployable trusses onto which 12 different, nadir pointing, EV instruments could be robotically assembled and concurrently operated to provide wide swath, multi-instrument measurements. In this concept, the commercial spacecraft provides all needed resources i.e. structure, power, thermal control, communications, and attitude control among others. The trusses have standard interfaces for instruments to connect to the truss. These interfaces provide structural connection with vibration isolation, power, communication interface and fluid loop connections for thermal control. Science Station provides an interface standard (e.g. Qin and Qout for thermal control) for instrument developers based on requirements from a survey of representative instruments. Science Station also provides a standard mounting plate for the instrument boxes. These plates have the corresponding male-female connectors for interfacing with the truss and equipped with features for robotic manipulation. An instrument developer would use this plate as the structural platform for mounting their instrument in the same paradigm as the ISS FRAM. The Science Station would have a Rendezvous and Proximity Operation sensor suite and an embedded robotic platform for berthing as well as instrument loading and unloading from carrier, and assembly onto the Science Station. Given that the spacecraft may have a 15-year life, Science Station would enable robotic replacement of instruments every few years, thereby allowing fast turnaround times for new instrument development and rapid response to science needs. This task will develop overall mission concept, robotics capabilities and instrument interfaces for the Science Station as well as interface with industry and other NASA centers to mature this concept.
Point of Contact: Rudranarayan Mukherjee
Sponsored By: Research and Technology Development Program