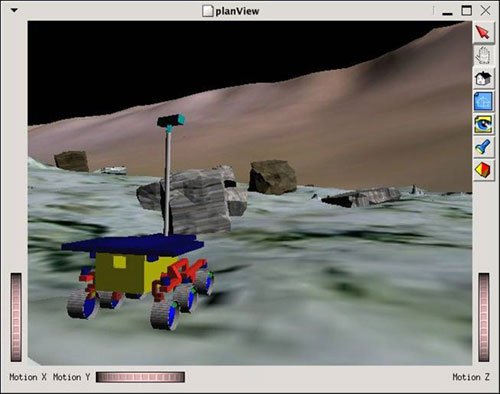 Simulation of the rover and unknown planetary surfaces is a key part of the SOOPS effort.
The SOOPS effort is highly leveraged by numerous independently funded NASA and R&TD new technology developments in robotics: SOOPS will integrate some of these 'sub-sytem' technologies at a mission- and rover-system level. This task will evaluate those technology developments for their potential to make significant improvements in the overall science return of future missions. Those ranked highly by the SOOPS leadership will be implemented in a test environment or encouraged to perform further development independently. Subsequent real and simulation experiments will test the improvements and document the level of improvements in science operations. In addition, we will study the implementation of candidate technologies with respect to different mission types, and document the expected science return and science risk in each case.

The final demonstration of SOOPS will be a small team of scientists operating a field rover using the developed technologies to complete a specific investigation on natural targets in a limited amount of time. The typical operations constraints, such as energy, time, and bandwidth, will be simulated to make the test as realistic as feasible. The field test results will feed into the assessment of what the true impact of the technologies could be to future missions on Mars, and will set an example for future science operations.

The PI of this work is Pamela Conrad. The former science lead for this effort was Albert Haldemann.
Point of Contact: Michael McHenry
Sponsored By: Research and Technology Development Program