Figure 1. Artist rendition of a SmallSat approaching and landing on a small Near-Earth Object

Small bodies in our solar system include near-Earth objects (NEOs), main-belt asteroids and comets, centaurs, and trans-Neptunium objects such as Kuiper-belt objects. To date, over 850,000 small bodies have been observed, but only 25 have been flown by to date, and as few as 7 have been rendezvoused with. NEOs, a subset of small bodies, are of interest to decadal science, human exploration, in-situ resource utilization, and planetary defense.

Given their abundance and diversity (both in composition and origin), the JPL Mobility and Robotic Systems Section has been developing and applying a wide spectrum of technologies to enable greater access to small bodies through advances in autonomy and robotics. It is developing robotic systems, algorithms, frameworks, and supporting infrastructure (simulations) to enable approaching, operating in proximity of, coordinating measurements across multiple spacecraft, landing on, and ascending from small bodies. Sensing and estimation includes both active (lidar and radar) as well as passive (visible and infrared) modalities. Estimation and control include autonomous orbit determination, hovering descent, landing and ascent, and rendezvous and station keeping. The section is also conceiving and developing robotic platforms that can move and manipulate the unknown and highly rugged surfaces of these bodies or ones that can aid in estimating their gravity.

NEOs are well-suited targets for advancing autonomy because they embody many of the challenges that would be representative of even more extreme destinations, while remaining relatively accessible by small affordable spacecraft (e.g., SmallSats). Technologies developed for autonomously approaching, landing, and exploring NEOs would be applicable to other more remote small bodies.

Autonomy is enabling for small-body missions because it would allow greater access to far more diverse bodies than the current ground-in-the-loop exploration paradigm. It enables scaling to missions that would require multiple spacecraft for their measurements, such as bi- and multi-static radar measurements. With onboard situational awareness, autonomy enables closer flybys, maintaining otherwise unstable orbits, maneuvering in proximity of irregular-shaped bodies, and safe landing and relocating on the surface.

Approaching small bodies is challenging because of the large scale changes in appearance of the target body and the a priori unknown motion and shape of the body (mainly for small bodies). Operating near, on, or inside these bodies is challenging because of their largely unknown, highly-rugged topographies, their poorly constrained surface properties, and the dynamic nature of the interactions between spacecraft and the bodies due to their low gravity, all of which require autonomy for effective operations. Learning to autonomously reach and explore such environments serves as a stepping stone toward more complex autonomous missions.

We are developing an integrated perception-rich estimation framework in collaboration with the Guidance and Control section and the Mission Design and Navigation section to enable the autonomous approach, rendezvous with, and landing on small unexplored bodies. The pipeline leverages a combination of established (centroid, light-curve) algorithms, new algorithms to estimate pole/shape-from-silhouette (Fig. 2), evaluation of onboard algorithms for feature/landmark-tracking, and algorithms for coarse and dense 3D reconstruction. The initial work is focusing on assessing the feasibility of an end-to-end estimation pipeline that maintains uncertainties below the estimation errors using realistic mission simulations with high-fidelity image rendering of real and artificial bodies. Experiments conducted from thousands of kilometers down to a few kilometers above the surface a sub-kilometer body indicate the viability of the estimation part of an autonomous system in establishing situational awareness. Such experiments assume limited a priori knowledge of the body dominated by large uncertainties from ground-based astronomical measurements, which included the body’s initial heliocentric orbit, rotation rate, and an approximate pole orientation. 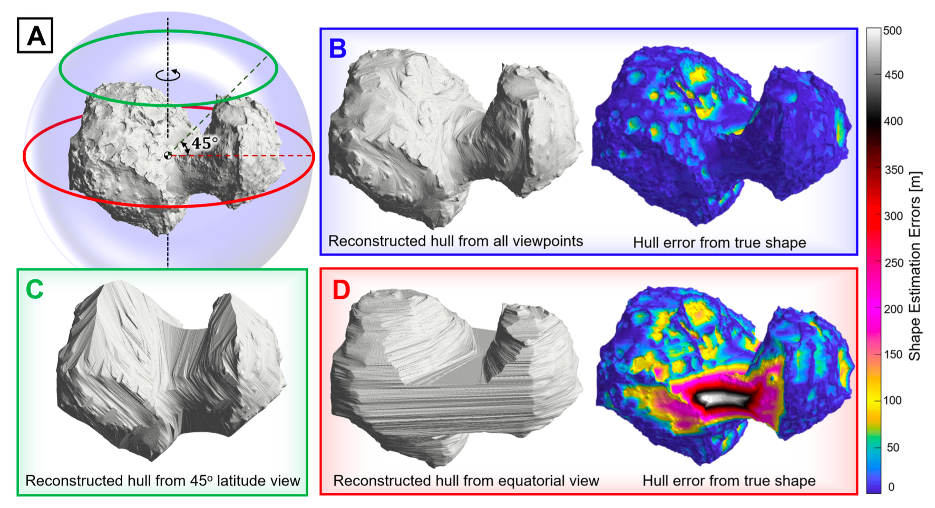 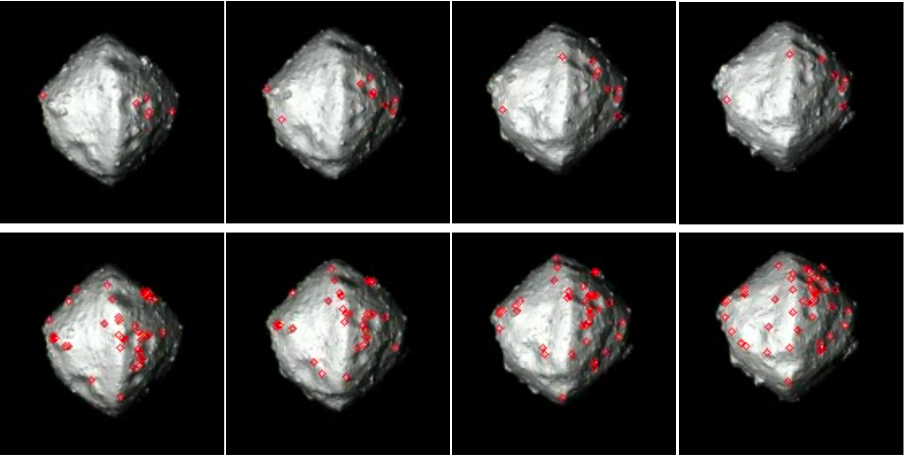 Detecting and tracking 2D image features and their corresponding 3D landmarks are critical for determining the orbit of a spacecraft relative to the target body. We have investigated scale/rotation/lighting invariant features as well as crater features. We have developed a sophisticated and robust crater-detection algorithm which has successfully detected craters in imagery of many different bodies (Fig. 4). We have also developed machined-learned features for small bodies and evaluated and compared to state-of-the-art feature descriptors and matchers.

We have also successfully developed a suite of landmark-matching methods including cross-correlation matching, Fast Fourier Transform (FFT) matching, landmark-descriptor matching, and geometric-invariant matching. These methods taken together can satisfy requirements for most small-body-exploration activities including both onboard and ground operations.

Estimation of Spacecraft and Landmark Positions

We have pushed the following technologies to fairly advanced levels: terrain relative-motion estimation using two images (monocular motion), bundle adjustment for estimation of both spacecraft position and landmark position, landmark-based pose estimation, and filtering of landmarks with inertial and attitude sensing for determining spacecraft trajectory (Fig. 5). Several of the capabilities have been developed and tested using a gantry test bed in the Machine Vision Laboratory as well as real mission data such as that from NEAR as well as simulated target body data.

For spacecraft landing, we have been developing and maturing the following capabilities:

Except for target tracking, these capabilities have been demonstrated on the JPL Autonomous Helicopter test bed by autonomously landing the helicopter in unknown and hazardous terrain. 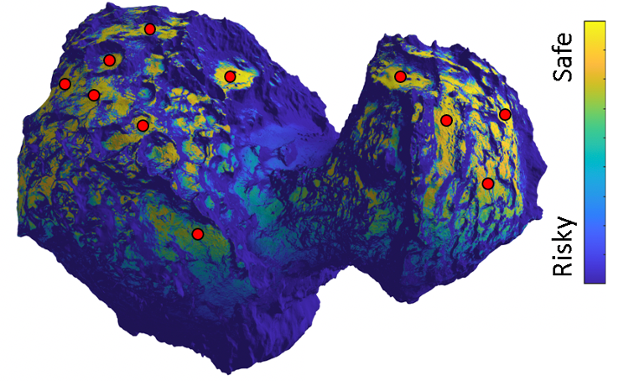 Figure 7: Hazard (rock) detection result on a NEAR final-descent image.

We are developing coordinated strategies for multi-spacecraft measurements. One such example is the multi-static radar measurements, which is shown in Fig 8. for a two-spacecraft antipodal configuration.

Figure 8: Artist rendition of two spacecraft in antipodal orbits around a small body

We have developed several prototype robotic systems for exploring, landing, and operating on small bodies. Fig. 9 shows a SmallSat system concept for landing on a NEO using solar electric propulsion to travel to the target body and cold-gas thrusting with autonomous control to assess and land on the small body. Fig. 10 shows the Hedgehog robot that uses three-mutually orthogonal flywheels with active braking to enable hopping/tumbling on microgravity bodies. Two such prototypes, one developed by JPL and a second by Stanford, were tested using a range of asteroid simulants on a parabolic flight. 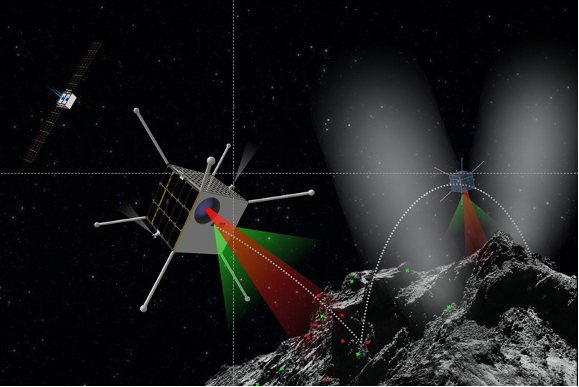 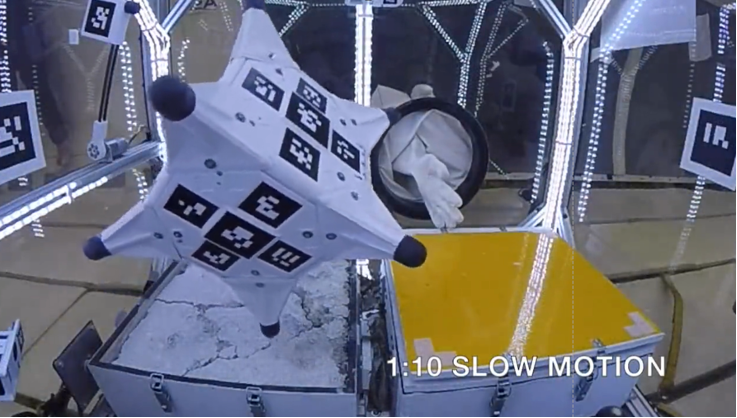 Figure 10. Hedgehog robot hopping off an asteroid simulant in a microgravity environment simulated on a parabolic flight 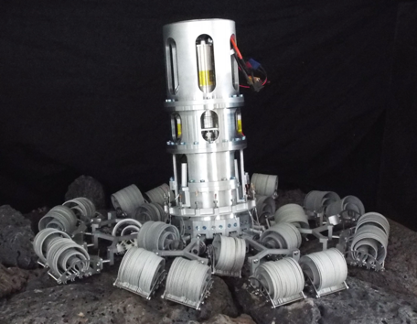 Figure 11: Small-body anchoring device that uses hundreds of microspines to grip to porosities in the rocky surfaces of some small bodies 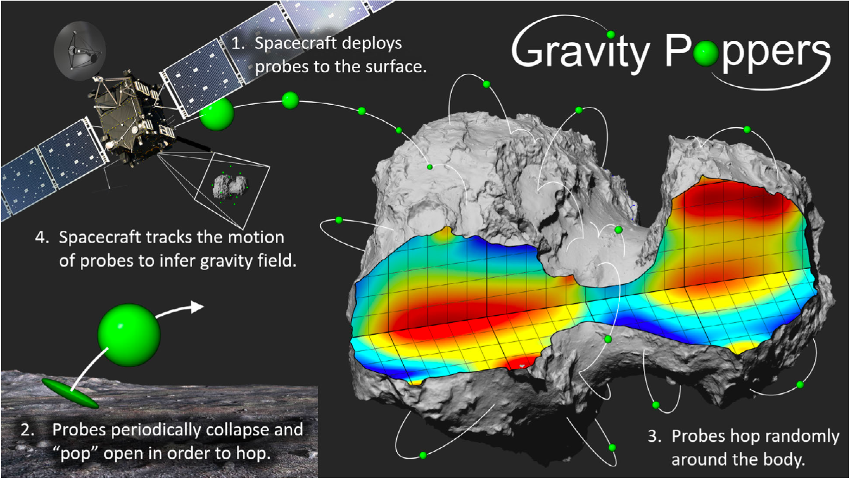 Figure 12. A concept for gravity estimation of small bodies Gravity Popper mission concept: A spacecraft deploys a swarm of hopping probes to the surface of a small body and then tracks their trajectories to precisely and iteratively refine a model of the body’s gravity field and internal structure.

Fig. 12 shows a novel mission architecture, termed “gravity poppers,” for high-resolution gravity science on small bodies. It consists of a swarm of small, minimalistic probes that would be deployed from a mother spacecraft to the surface of a small body and which would periodically and randomly hop around the surface. By tracking the ballistic sub-orbital trajectories of this hopping swarm, a very high-resolution gravity field can be measured, which can then be used to answer a number of scientific questions of interest regarding the interior mass distribution of the body.

These are among the few system concepts that have been investigated for exploring small bodies.