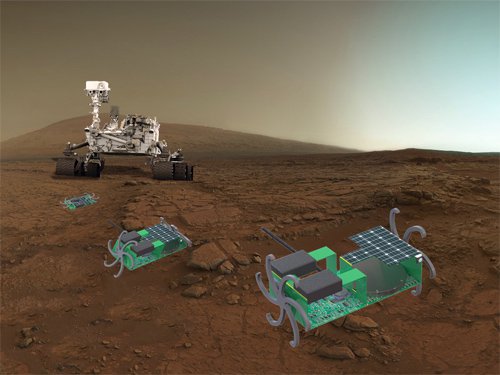 PUFFER is an origami-inspired robot concept that would provide future NASA missions with simple, low-cost access to new high-value extreme terrains. Example terrains could include caves and lava tubes on Mars, or icy “chaos terrains” on the surface of Europa. These terrains pose significant mobility challenges that may be easier to surmount with a multitude of small, low-cost notional PUFFERs. The PUFFER concept would have a lightweight, collapsible body that would fold into a very small volume onboard a “parent” spacecraft, such as a larger Mars rover or a Europa lander. PUFFER’s small size and low cost would allow the parent spacecraft to carry a large number of notional PUFFERs, stacked away in a small enclosure. When the parent encounters exciting terrain that is beyond its own scope, it would simply eject one or more low-cost PUFFERs and dispatch these into the features of interest. The ejected PUFFERs then would unfold themselves and explore the target environment, returning science data to the parent for relay back to scientists on Earth. This project will develop a series of PUFFER prototypes for field testing at Mars-analogue sites in the Mojave Desert.
Point of Contact: Jaakko Karras
Sponsored By: Game Changing Program