Skip Navigation
Home > What We Do > Research Tasks > Cave Robot 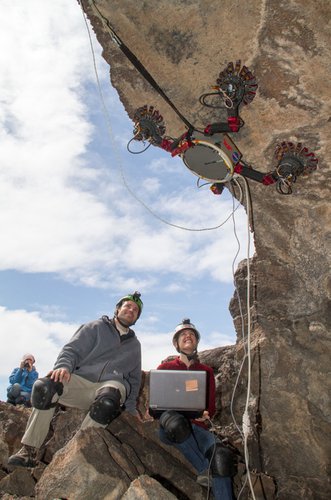 Field testing of the Cave Robot.
This research is developing gravity-agnostic mobility for any natural terrain. The robot uses hundreds of sharp claws called microspines that adapt to a surface independently to create secure anchor points. After vertical and inverted climbing demonstrations in the lab in late 2012, we were given a Popular Science Best of What’s New Award for an Innovation of the Year. In this task, we are performing high-fidelity field experiments to test the robot’s mobility in caves in California and New Mexico. Caves provide a chance to test the robot in all gravitational orientations for future missions to caves on Mars and the Moon, or for missions to asteroids, where a mobile robot will have to grip to the surface to avoid falling off. Microspine grippers were also tested successfully aboard NASA’s zero-g aircraft on multiple rock types, enabling the first ever zero-g drilling demonstration in 2014.
Point of Contact: Aaron Parness
Sponsored By: Center Innovation Funds