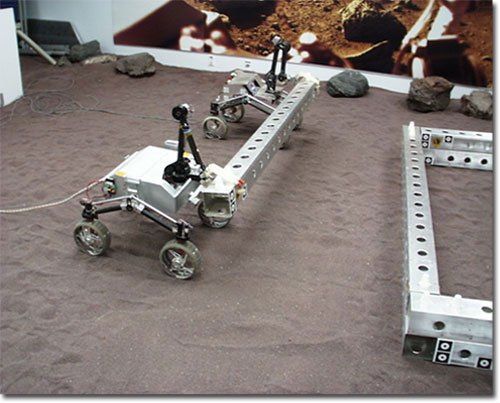 Sustained scientific collection sites on planetary surfaces will be dependent on available onsite assembly, inspection, and maintenance capabilities. Key capabilities for assembly operations during planetary surface missions include closely coordinated manipulation and movement. Included in the potential suite of behaviors would be grasping, hoisting, winching, and traverse. Tightly coupled systems, where continuous coordinated motion with a control cycle time of 10Hz of multiple robots that are physically linked through a shared payload or tethers, are key to these types of operations. On the one hand, multi-robot systems offer the redundancy needed for long duration mission risk mitigation. However, this is tempered by the increased complexity involved in designing and implementing a suite of control algorithms for such systems.

To address these concerns we have developed a control architecture called CAMPOUT (Control Architecture for Multi-robot Planetary Outposts) that is tailored for space-based multi-robot systems. CAMPOUT includes all of the behaviors, communication, and task planning primitives for complex multi-robot operations such as space construction. Tests run under previous work on solar panel deployment scenarios involved autonomous payload acquisition, transport to site, and manipulation for deployment operations. We will leverage the systems and capabilities from the previous effort for the proposed assembly operations in this effort.

The goal of this work is to demonstrate the reusable aspects of the multi-robot control architecture for acquisition, transport, and placement of a compliant component such as a panel into an existing surface structure.
Point of Contact: Terry Huntsberger
Sponsored By: Exploration Systems Research and Technology