The overall objective of the DARPA Anti-Submarine Warfare Continuous Trail Unmanned Vessel (ACTUV) Program is to demonstrate technical feasibility of a beyond-state-of-the-art cognitive capability for trailing quiet diesel-electric submarines for long periods of time from an autonomous surface vehicle (ASV). During the course of the trailing activity, the ACTUV may encounter rough weather (sustained winds of up to 27 knots) and high sea state (waves up to 4 meters high) conditions. There are two issues that must be addressed for effective use of sensors and for safe navigation in high sea state conditions: (1) sensing while characterizing of the high sea state condition and its degradation of ACTUVs perception capability, and (2) modification of the navigation algorithm based on that characterization.
For the first issue, real-world data is being analyzed to generate an onboard sensor based estimate of sea state. This sea state estimate information is then used to produce wave pattern parameters such as wave height, wave frequency, wave direction, and peak-to-peak spacing. A 3D sea surface model is generated and any sensed object above this sea surface model is considered to be a potential hazard to safe navigation. For the second issue, a safe path for the ACTUV is generated that takes into account the direction of waves and wind, sea state, and control surfaces on the ACTUV. The system will be tested first on the water using surrogate boats, and then integrated onto the ACTUV platform for further at-sea testing.
Point of Contact: Terry Huntsberger
Sponsored By: DARPA 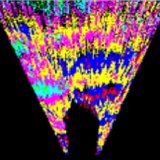