As the Mars Science Lander (MSL) spacecraft approached Mars, a process called "targeting" was used to determine the final aim point for the spacecraft's entry into the Martian atmosphere. This aim point was chosen by running DSENDS, a physics-based EDL simulator. DSENDS used an initial guess at an aim point provided by an inter-planetary trajectory solution, and then propagated the spacecraft trajectory from entry through landing using models of the spacecraft dynamics. Based upon the achieved miss-distance to the desired landing site, DSENDS then adjusted the aim point. The new aim point was fed back to inter-planetary trajectory tools and used to determine the final trajectory correction maneuvers (i.e. thruster firings during planetary approach) needed to achieve the landing target. A high-fidelity Monte-Carlo simulation of the EDL sequence was generated to determine the dispersions of the landing point using parametrically varied models of the multi-body entry system, atmosphere, and aerodynamics, operating in closed-loop fashion with a copy of the on-board flight-software. This dispersion information was used by the MSL mission operators together with a hazard map of the landing terrain to determine the overall probabilistic risk associated with landing. All results of the DSENDS simulation were compared against similar results from another high-fidelity engineering simulation (called POST from NASA Langley) to ensure a high level of simulation data validation.

To complement the EDL targeting, a 3D visualization software framework was also developed. This provides a real-time, multi-mission, 3D visualization playback and geometric reconstruction capability for use by mission engineers and management to view spacecraft and environment states during targeted mission phases, in addition to providing visualization during post event reconstruction. The EDL Reconstruction System can use either real-time telemetry or provided simulation data. MSL mission staff relied on the EDL Reconstruction System to view the state of the spacecraft from the real-time telemetry stream during landing on Mars. Also, for post-EDL reconstruction, MSL analysts use the system in a playback mode to better understand the state of the spacecraft during the EDL phase. 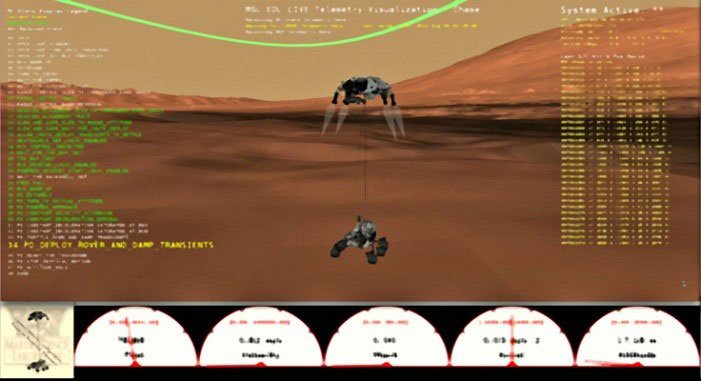 One view provided by the EDL Reconstruction System for MSL.