Skip Navigation
Home > How We Do It > Systems > Rocky 8 Rover

The Rocky 8 rover is a research vehicle that was used to develop, integrate, and demonstrate advanced autonomous robotic capabilities for future Mars missions. Rocky 8 is mechanically based on the FIDO design, which was increased in size roughly by a factor of two over its predecessor, Rocky 7, allowing more payload and sampling capability.

Rocky 8, with its 20-cm-diameter wheels, is about twice the length and width of Rocky 7. As with most JPL rovers, Rocky 8 uses a rocker-bogie suspension that enables it to traverse very rough terrain. This rover also has two manipulators: an arm and a mast. The 5-DOF arm mounted on the top deck provides a large workspace for instrument placement, while the 2-DOF fixed mast holds cameras at approximately human eye level.

As with MER, the imagers on Rocky 8 are arranged in stereo pairs with 3 fields of view. Two body-mounted stereo pairs, front and back with wide fields of view (~2 rad), provide imagery for obstacle avoidance, manipulation, and visual odometry. Two mast-mounted stereo pairs, having standard (~ 1 rad) and narrow (~1/3 rad) fields of view, are used for similar operations as well as target tracking and operator views. There is also an upward-looking camera with a 3-radian field of view serving as the sun sensor used for absolute heading estimation, and complementing inertial estimates obtained from the onboard 6-DOF IMU.

While these mechanical and sensor configurations are similar to the other FIDO-style rovers, Rocky 8's primary differences come from its hardware control architecture. Conceived as a research platform for distributed control, Rocky 8 uses custom "widget" boards for its decentralized motor control. The widget board is a single-axis motion controller with digital and analog I/O capabilities, and a small programmable PIC microprocessor. With a size of 1" x 3", these boards are distributed and co-located with the actuators to reduce cabling complexity and enhance extendibility. The boards are connected to the main processor through a serial I2C bus, selected to be consistent with the previous design baseline of the 2001 Mars rover mission (which was delayed to 2003, and changed in electrical configuration). The main computational system on Rocky 8 is a Compact PCI with x86 processor. Currently Rocky 8 contains two Compact PCI chassis, one 6U and another 3U which can be toggled to support either an x86 or PowerPC processor. A wireless Ethernet unit provides communications. Rocky 8 also uses lithium-ion batteries, which can be charged through its solar panel.

Technologies such as long traverses with obstacle avoidance, multi-sensor pose estimation, single-cycle instrument placement, and autonomous activity planning have all been demonstrated on the Rocky 8 rover. 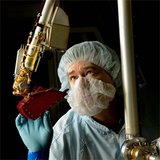