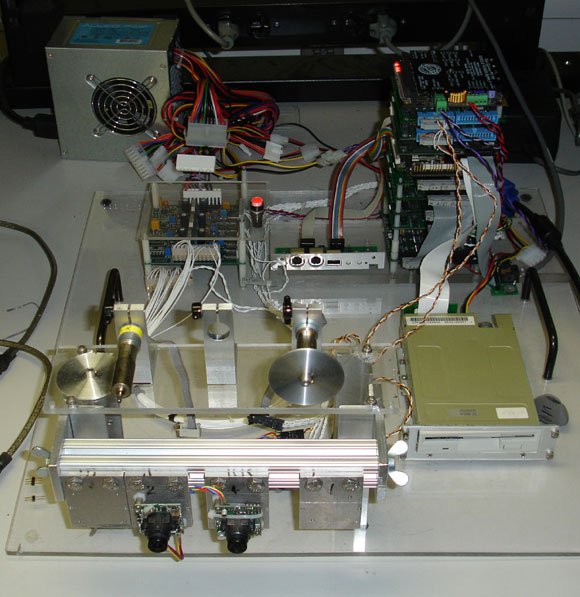 One of several benchtop systems that duplicate essential components of rover electronics for ease of testing. Shown is a PC104 computation stack (background) with controlled motors and stereo cameras (foreground).

The CLARAty Laboratory is a facility for the development and testing of onboard robotic control software. It is set up for both local and remote access from various locations at JPL and at outside partnering institutions. This facility offers a number of embedded benchtop systems that replicate the rover avionics of some of NASA's research rovers and robotic platforms. These embedded targets include benchtop avionics for the Rocky 8, FIDO, Rocky 7, K9, and MAX rovers as well as for the Dexter manipulators.

Most benchtop systems use either Compact PCI chassis or PC104 stacks, replacing the older VME chassis that were used by the Rocky 7 rover. The benchtop systems run various hardware and software real-time operating systems, which include VxWorks, QNX, and various flavors of Linux.

Peripherals similar to those used in the rovers are attached to these benchtop systems. For example, the Rocky 8 benchtop has a Rocky 8 wheel assembly, which contains drive and steering actuators and potentiometers. Stereo camera pairs, inertial measurement units, and instruments are also connected to various benchtop platforms. An Infrared Point Spectrometer science instrument is also part of the test bed and is used for the development of spectrometer and science algorithms. Remote users can use the live video web camera, which has zoom capabilities, to monitor device status and motions. 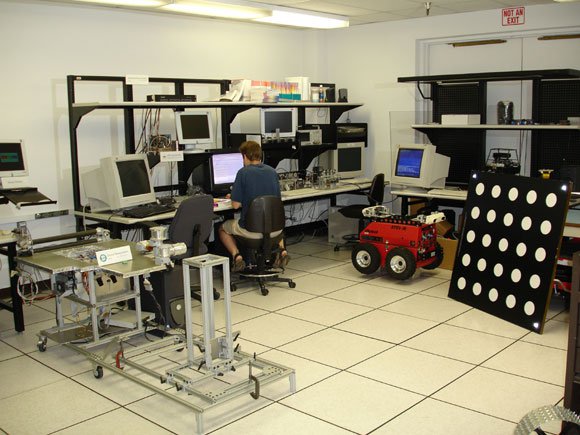 Fig. 2: One view of the workspace in the CLARAty lab showing (left to right) the Dexter rover emulator with manipulator, a software developer at his workstation, two benchtop system including that from Figure 1, the Clifford rover, and a camera calibration target with dots.

In addition to the robotic benchtops, this facility also provides the instrumentation and tools for the development and debugging of firmware for the Microchip Technology's PIC processors. It also offers various PCs with Linux, PCs with Windows, and Sun Solaris platforms for embedded software development.

Researchers develop and test their embedded software on these benchtop systems prior to deployment on the rovers. Upgrades for rover avionics and the integration and testing of various devices are also carried out at this facility.