Skip Navigation
Home > News > Up, Up and Away -- To Venus 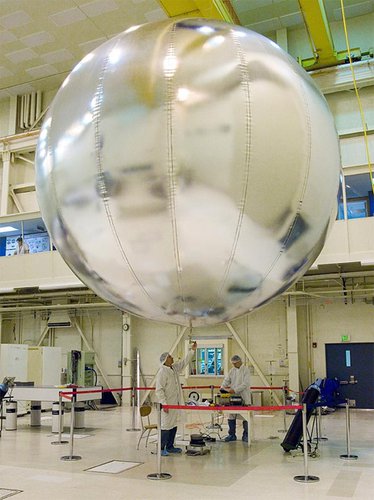 A prototype Venus balloon in a JPL cleanroom.

Scientists hope to learn more about climate changes here on Earth by studying Venus. A prototype balloon could eventually study the planet's surface and examine its atmosphere and the bizarre winds and chemistry within it. A team of JPL, ILC Dover and NASA Wallops Flight Facility engineers designed, fabricated and tested the balloon.

Slightly smaller than Earth, Venus is often regarded as Earth's sister planet. Both have similar densities, chemical compositions and gravities. However, its atmosphere is nearly 100 times thicker than Earth's, which causes blazing temperatures at the surface. By flying in the cool skies above Venus, the balloons would avoid that environment.

"The surface is hot enough to melt lead, which is why we can't study it for long from a lander," said Kevin Baines, JPL principal investigator for a proposed mission to Venus. "Without extreme and costly refrigeration methods, a lander would cook at those temperatures in just a few hours, but a balloon can stay in a benign environment, studying the planet for days, weeks or even months."

The spherical balloon, 18 feet in diameter, is about the size of an inflatable children's jumper. Its aluminum coating reflects sunlight to protect the balloon from becoming too hot as it flies in Venus' upper atmosphere. Its outer transparent layer of the balloon is made of polytetrafluorethylene, also known as Teflon, the non-stick material found in cookware and on clothing. The material is highly resistant to the sulfuric acid found in clouds surrounding Venus. "The sun shines through the Teflon and reflects off the aluminum, and that keeps the balloon from overheating," said Jeff Hall, JPL's lead balloon engineer.

The balloon's second layer has a mylar film similar to those shiny helium balloons found in a grocery store. The mylar is used to prevent gas from leaking out. The next layer is made of a Vectran fabric that provides the strength to keep the balloon from bursting due to internal pressure. The innermost layer has a polyurethane coating that enables all sections of the balloon to be glued together.

More details about the design, fabrication and testing of the balloon are reported in a paper published in the journal Advances in Space Research..

The proposed mission would have two balloons, one at a tropical latitude, the other at a polar latitude. Each helium-filled balloon would fly about 56 kilometers (about 35 miles) above Venus' oven-hot surface, in temperatures about the same as a spring afternoon in Los Angeles. It would take about four days for the helium superpressure balloons to fly completely around the planet. After the balloons are launched from Earth, they would arrive on the night side of Venus.

"The winds at that altitude are very strong, more than 320 kilometers per hour (about 200 miles an hour), and will blow the balloons around the planet," Hall said. "Engineers would not have control of where the balloons travel. Once the balloon starts flying, it is totally dependent on the winds."

Each balloon would have quite a roller coaster ride, moving up and down about a half a mile in altitude as they ride gravity waves generated by Venus' mountainous terrain.

"This was one of the surprises of the Vega balloon mission the Soviet Union flew more than two decades ago," Baines said. "Enormous gravity waves appear to rise up more than 30 miles into the upper atmosphere, causing unexpected depositions of energy generated at the surface and producing strong vertical movements of air. We want to ride these waves, measuring their effect on Venus' bizarre high-speed winds."

Scientists believe the Venus balloons could also help us learn more about climate changes here on Earth. "Venus is a place where global warming has gone amuck," Hall said. "It's about the same size as our planet, but the surface is about 900 degrees Fahrenheit, and we want to find out why."

Scientific instruments aboard the balloons would analyze the composition of Venus' atmosphere. The pressure cooker atmosphere around Venus quickly changes and is filled with specific gases, such as helium and neon, which do not interact chemically with other materials, allowing researchers to trace the formation of Venus over time. Noble gases can help scientists determine the geological history of the planet, which could lead to answers about current climate changes.

Various studies indicate Venus once had oceans of water much like those on Earth, but now the planet is dry. According to Baines, Venus began as an oasis with conditions favorable for life in its first billion years. "Venus now has an extreme climate. It changed from being wet and wild, to dry and dead, and it seems to have happened in the last three billion years. We'd like to find out how this global transformation happened."

The current explanation for the dry atmosphere and extremely hot surface temperature is that Venus does not have a magnetic field to provide protection from solar winds. Those winds smash into the top of the atmosphere and drag off hydrogen that is needed for water.

A payload weighing more than 40 kilograms (about 90 pounds) would fly with each balloon to help transmit data back to Earth. Included in this payload would be a flight computer, radio transmitter and 9 kilograms (20 pounds) of electric batteries to power the equipment. Also included is a suite of science instruments:

1. A gas chromatograph mass spectrometer to measure the amounts of gases on Venus and to sniff for volcanic smoke.

2. An atmospheric structure instrument would measure the pressures and temperatures of the atmosphere and the vertical winds as the balloons bob up and down. This instrument also includes a nephelometer instrument to measure the size and density of cloud particles through light reflections.

3. A lightning detector to measure the power and frequency of nearby lightning strikes in the atmosphere.

4. A microphone to record any nearby sounds in the atmosphere, including thunder.

Ground-based radio telescopes using an interferometric technique would be used to measure how each balloon moves around the atmosphere. "We'd be able to tell its velocity within one inch per second of movement over an hour," Baines said. The telescopes would also use the Doppler effect to complete a set of 3-D measurements of each balloon's movements.

The company that built the airbags for the Mars Exploration Rover mission, ILC Dover, Frederica, Del., also helped design and build the balloons. The balloons are folded into small packages to fit inside the launch rocket that also include high pressure helium tanks and valves. Once the balloons reach the planet, the heavy tanks would drop away so the balloon could float away.

The balloon mission would likely end one of two ways: it might run out of battery power, when the balloons would be unable to communicate with ground controllers, or if a balloon develops a leak, it would eventually lose altitude and overheat the payload until it stops working. Hall and his team of engineers in JPL's aerobot laboratory have tested the prototype and determined it can float for up to 12 days without leaking any helium gas. A 12-day flight would be long enough to allow the balloons to circumnavigate the planet three times.