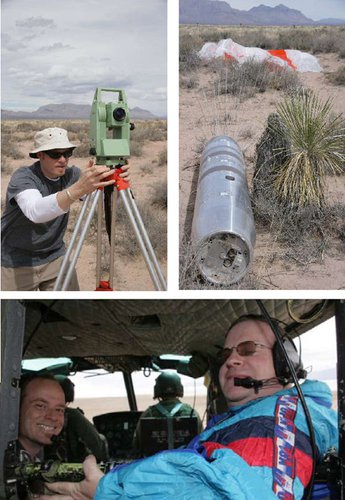 Crew members inspect the sounding rocket used for a Space Technology 9 test mission at White Sands Missile Range, N.M. At center is JPL's Paolo Bellutta, who served as the lead experiment engineer for the JPL equipment flown on the mission.

(Reprinted from the JPL Universe newspaper. For the original article, click here)


In an effort to help future NASA missions land safely at more desirable but potentially perilous locales, JPL will develop a prototype of an automated, onboard system to enable pinpoint navigation along with the detection and avoidance of hazards during a spacecraft's descent to the surface.

Through a series of flights using the New Mexico desert as an analog for deep-space outposts, the project, Space Technology 9, is the newest in NASA's New Millennium Program to test leading-edge technologies and reduce their risk for future spaceflight.

"We want to give the science community the ability, in the future, to send robotic spacecraft to new and scientifically interesting places that we can't go to right now because it's too dangerous from an engineering standpoint," said Project Manager Sam Thurman.

"Inevitably we will want to go to a place that's scary in terms of trying to land. Our system will allow a spacecraft to see where it's going, recognize features you might want to go to and take you there while recognizing hazards that should be avoided."

In this extended Phase A study, the project team is working to replan its schedule and budget, as directed by NASA Headquarters, by the end of July. "We believe we can achieve NASA's goal of a 40 percent cost reduction," Thurman said, adding that pending Headquarters approval to go forward, the project would start in fiscal 2008.

The original proposal called for four different suborbital flight test missions and three major field test campaigns. The new plan, Thurman said, includes three such flight tests, the first of which would be in 2008 and the last two in 2011. A single field test campaign would be conducted in parallel with preparations for the 2008 flight test.

At the heart of the project is the terrain-relative guidance system, which integrates computer vision and inertial sensing to perform terrain-relative navigation, hazard detection and landing-site targeting.

"This is the Holy Grail," Thurman said, "in that the system can see if it's headed for the inside of a crater you don't want to land in, or any other hazard. You know it's coming and you're able to avoid it." Rather than having a spacecraft rely solely on inertial sensors for guidance, Space Technology 9's computer vision system will provide for images to determine location before deceleration and atmospheric entry and additional imaging updates during terminal descent.

"One of the reasons computer vision as a means for terrain-relative guidance is so appealing is because it can work at so many different places," Thurman noted. "Europa, for example, has bizarre features caused by stresses and strains in its icy crust, leading to sharp ridges and chasms that crisscross allover the surface. Earth's moon and Mars have many relatively large flat spots to send landers but there really aren't any large flat spots on Europa. So it's much harder to eventually go to a place like Europa without having some kind of ability to see terrain, recognize where you want to go-and don't want to go-and get there safely."

Besides the benefit of avoiding hazards, Space Technology 9 looks to provide the most precise landings ever attempted on planetary bodies. "We want to be able to deliver future landers or impactors to within 100 meters (about 328feet) of a targeted landing site, with 99 percent probability, and in conjunction with that, we want a system that can recognize meter-size landing hazards," Thurman said. "For comparison, the Mars Exploration Rovers were designed to land, with a 99 percent probability, within 35 to 37 kilometers (22 to 23 miles)of where we wanted to be."

The project will test the system with a series of sounding rocket missions at White Sands Missile Range, N.M., chosen due to its geology and variety of terrain types, many of which are similar to surfaces of the moon and Mars. These missions will be conducted in a partnership with the Wallops Flight Facility, which runs the NASA Sounding Rocket Program, and Langley Research Center. Sounding rockets are small vehicles used mostly to carry science experiments into space for short periods of time and they're typically built around rocket motors from surplus or retired military ordnance. The Space Technology 9 test missions, for example, would last about 15 minutes. By comparison, the Mars Exploration Rovers took about 10 minutes from atmospheric entry to touchdown.

"Sounding rockets are useful because they achieve very high accelerations and speeds comparable to those of a decelerating planetary lander, during both ascent and re-entry," noted Thurman.

A developmental test flight last year at White Sands obtained inertial sensor data over a 122-kilometer-high (75mile) trajectory and low-altitude imaging data from about 20,000 feet on down, Thurman said. "We didn't have a computer vision system onboard but we used the pictures and sensor data to test the software we'd eventually run in an onboard computer. The test flight we plan for next year will allow us to get images of the ground taken from space for the first time (as well as inertial sensing again), then use that knowledge, along with the results from our first flight, to do a detailed design of the onboard computer system and software."

If all goes well in testing over the next two years, two end-to-end test flights would be scheduled for 2011.

"This would give us redundant opportunities to prove our onboard computer system for real," Thurman said. "We have two of them for the same reason we had two Mars Exploration Rovers. If problems or difficulties are encountered during the first of those two final missions, we'll have another opportunity to incorporate fixes and corrections based on what we've learned."

The results of the first test mission last year also provided an unexpected bonus for the Phoenix Mars lander, scheduled to launch in August.

In evaluating candidate landing sites last fall, the Phoenix Project learned that Larry Matthies, Space Technology 9'scomputer vision principal investigator, was developing a recognition algorithm for the terrain-relative guidance system, and asked if they could use these algorithms to analyze their high-resolution images from Mars Reconnaissance Orbiter.

Thurman lauded JPL's "time-honored approach" where test and validation objectives for new systems are achieved incrementally over multiple tests, enhancing the quality of computer-model validation efforts and minimizing risk. "One of the benefits is you get products and knowledge along the way that you can use for other beneficial purposes you didn't realize ahead of time," he said. "When we started that first flight test, I had no idea we'd be able to use the results to help Phoenix out, but we have." But that's what the New Millennium Program is for, to make just that kind of thing happen."

"We hope that within the next 10 years the first operational use of the terrain-relative guidance system will take place," Thurman said, noting that possibilities could includean asteroid sample return mission as well as the human spaceflight program.

"One of the things I like about this capability is its potential widespread usage - human flights to the moon, space science missions, Mars, Europa, asteroids and comets," Thurman said. "That's been JPL's history - push the boundaries of what's been done and do new things, and that's almost always meant going to places we've never been before."