Learning To Drive The Mars Rovers 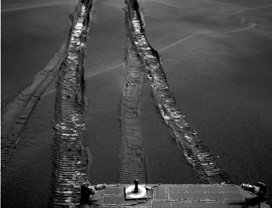 It required more than five weeks of planning, testing, and carefully monitored driving to free Opportunity from the soft, sandy material of a wind-shaped ripple, later dubbed Purgatory Dune, on Mars.


Learning to drive a Mars rover is no easy task. It's not a process you can just read up on and do right the first time. For one thing, there is the time lag to contend with. It takes ten minutes or more for a radio signal to travel between Earth and Mars, so you get no rapid feedback to show the result of a command or allow for quick corrections of mistakes. The surface of Mars, rock-strewn and with many different types of soil, poses constant challenges. And you have to become intimately acquainted with the peculiarities and limitations of each rover. Spirit (MER A) has been challenged with mountainous territory and now has power constraint issues that have to be taken into account. Opportunity (MER B) has been used to explore a relatively flat, crater-strewn area; it has developed different problems over time that affect what you can ask it to do.

As one of the original group of ten drivers (or "rover planners," as we are called), I came to the task with eighteen years of experience driving planetary rover prototypes and had been a rover driver for the Mars Pathfinder Sojourner rover. I had also led the team that created the software tool called RSVP (Rover Sequencing and Visualization Program) that rover planners use to create the command sequences for the rovers each day, so I knew how the system was supposed to work. Even so, my fellow planners and I had to do a lot of on-the-job training. Getting Opportunity out of the first crater was a challenge. It got stuck in soft soil material, and we had to learn to drive it up the sloping crater wall at an angle and figure out how to seek out more coherent soil. Later the rover's wheels got buried in a sand dune, which we named "Purgatory" in recognition of the long, slow process of extracting it.

Over time, we developed new techniques and sequences to deal with the conditions we found on Mars. We do "slipchecks" to verify that the rover is not stuck - sequences that have the rovers use their onboard visual systems to track features in images and tell if the rover is slipping on soil. Since the rover's flight system assumes perfect traction when they look at the progress of the six wheels, we compensate for slippage in the Martian soil by programming a slightly longer distance than we actually want the rover to travel.

Because of the complexity of the task and the potential damage of a serious mistake, planners always work in pairs. Rover Planner One gets requests from the science team and writes command sequences to carry them out. Rover Planner Two checks the sequences, negotiating changes when necessary, until he or she is confident that the program will work and is willing to take ownership of it. Only then are the sequences sent to a rover.

To develop new teams of planners, we first try to identify promising candidates, using several important basic criteria. Early in the mission we wanted people who could live on Mars time, who have both the commitment and the family support needed to make that possible. Since the Martian day is about forty minutes longer than a day on Earth and most rover operations are only possible when the rovers' solar panels are generating power, planners need to work during the Martian day. In the first three months of rover operation, this meant shifts at all hours of the day and night, seven days a week. Now that we have gotten more from the rovers than we ever expected and the cost per day of exploration has decreased, planners operate in a more Earth-normal mode and take most weekends off. But a planner's eight- hour shift can still start anywhere from 6:00 a.m. to noon.

Good hand-eye coordination is essential, and the ability to visualize and work in a three-dimensional space is important. During the interviewing process, we sometimes ask people what video games they like to play. A flight simulator fan is a more likely candidate than someone who prefers solitaire. We also favor people who have already worked in some capacity on the Mars Exploration Rover mission and are likely to have some familiarity with the subsystems. Many of the candidates recommended to us are from Jet Propulsion Laboratory's mobility and robotic systems section, where they have gotten relevant experience. Finally, and not surprisingly, we look for people who have the enthusiasm needed to devote the time, energy, and attention that learning and applying rover-driving skills require.

Those chosen for training usually start by spending several months as downlink analyzers. Interpreting the information sent by the rovers helps them learn the subsystems. The job also teaches them how to analyze the "health" of the rovers and familiarizes them with the kind of scientific data their future work as planners will help acquire. At the same time, they begin practicing with the RSVP tool - the software used to command Spirit and Opportunity - which lets them visualize what the rovers do in response to instructions. This virtual training includes using 3-D goggles that allow them to see a stereoscopic image on the Martian landscape that the rovers traverse. Although a few veteran planners who do not have stereoscopic vision have found ways to compensate, the depth perception that 3-D provides makes it much easier to evaluate this unfamiliar terrain - for instance, judging the height and depth of rocks to determine whether they are small enough to roll over or will impede a rover's progress.

Some of the trainees continue to do part-time downlink work when they move on to the next learning phase: five to eight months spent "shadowing" the rover Planner Two role. They work with different teams on different shifts, so their mentors change from day to day and they get the benefit of observing the techniques of a variety of planners. They watch the planners at work; they study documented processes and read the rover planner Web site and wiki to keep abreast of the latest thinking on guiding the rovers. Over time, through this combination of observation and reading, they learn the "flight rules" for rover operations. Their planner mentors give them small tasks and then gradually ask them to do more and more until they're essentially performing the rover Planner Two role under supervision. The veteran teams that work with the trainees meet to share impressions of their progress and decide when an individual is ready to fly solo and become a planner. In fact, the process is akin to learning to fly an airplane, doing more and more under the supervision of an expert until you become expert enough to handle the controls without supervision.

After gaining experience as rover Planner Two, the candidates begin shadowing rover Planner One. They go from being a checker and explainer of rover sequences to being the sequence creator. This transition can last several months, after which, if they pass the scrutiny of the veteran driving team, they graduate as full-fledged rover planners.

The process is a kind of apprenticeship, where observation, study, and supervised practice combine to pass on knowledge and skills that book learning or theoretical discussion alone could never teach. We think this is the only effective way to teach the complex and subtle skills a rover driver needs. As of fall 2006, we have had seventeen rover planners responsible for moving Spirit and Opportunity over the Martian surface. So far, the two rovers have safely and successfully carried out their mission, functioning for more than 950 sols (Martian days) and traveling a combined distance of almost 16 km.

Brian Cooper has twenty-one years of experience creating ground control software for planetary robotic vehicles and is currently at Jet Propulsion Laboratory/CalTech. He led the development of the RSVP software tool and was the lead rover driver for both the Mars Pathfinder Sojourner and the Mars Exploration Rover missions.