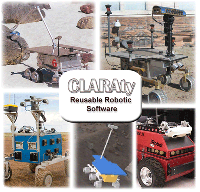 Some of the platforms which use CLARAty software.

CLARAty is the Coupled Layer Architecture for Robotic Autonomy. The first release of its software, version 0.10-beta, is now available publicly at http://claraty.jpl.nasa.gov.

CLARAty is an integrated framework for reusable robotic software. It defines interfaces for common robotic functionality and integrates multiple implementations of any given functionality. Examples of such capabilities include pose estimation, navigation, locomotion and planning. In addition to supporting multiple algorithms, it provides adaptations to multiple robotic platforms. CLARAty development was primarily funded by the Mars Technology Program and it serves as the integration environment for the program's rover technology developments.

With this release, a total of 44 CLARAty modules (~100K lines of source code) are now available under Caltech TSPA License. This release is intended to share with the robotics community some of the core robotic modules which were jointly developed with NASA Ames Research Center, Carnegie Mellon, and University of Minnesota. This first release represents about 10% of all CLARAty modules and 30% of the generic modules planned for future release.