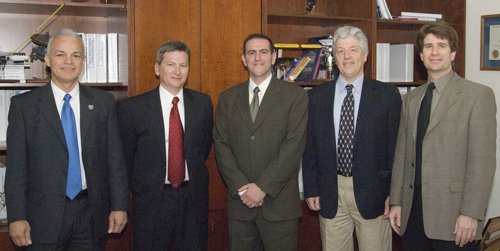 (This information is reprinted from the One NASA Peer Award website)

CLARAty is a reusable software program that unifies robotics software from across the Agency, providing robotic functionality and simplifying the integration of new technologies on robotic platforms. As a research tool, it is designed for the development, validation, and maturation of various research technologies. The key source code for CLARAty is available across NASA and, the older version of software was just released for public use, with the most recent version expected to clear in the coming months.

CLARAty is the first NASA-wide effort to unify the robotics software community and, as a consequence, standardize robotics software. The software development community in general has historically been fragmented (both inside and outside the walls of NASA). At the start of the project, JPL partnered with Ames Research Center (ARC) in addition to MIT/Carnegie Mellon as the primary university partners. The team faced tremendous technical and non-technical barriers in their efforts. They were responsible for bringing together a large stakeholder group and securing "buy-in" for the merits of the project. The effort is truly multi-institutional. ARC will be using the software on Robotic Lunar Exploration Program missions, including the Lunar Rover. As a result of working with Ames, the CLARAty Team developed common standards, procedures, and processes that are a model for the Agency. Near-term programs and missions that have been impacted by CLARAty are the Mars Exploration Program, Mars Exploration Rover Mission, and Mars Science Laboratory Mission.

The future impact to missions could be considerable. JPL could be playing a largely support role in the Return to the Moon initiative, and as part of this effort we are working jointly with JSC and ARC on a robotics technology program. The development of a "flight version" of CLARAty, which is currently being examined, could make a key difference. This could be the application for future solar system missions beyond the moon and Mars. CLARAty could be the basis for all exploration vehicles whose primary job is navigation on or over planetary surfaces and interact with them, to include rovers for the Moon and Mars, hoppers for low gravity objectives, and aerial platforms for planets with dense atmospheres (Titan and Venus).

Additional barriers that the CLARAty Team faced include overcoming export regulation concerns to publicly release software (it is part of the software development community culture to release code into the public domain to enable community-wide use and evolution). As a result of their efforts, the CLARAty Development Team has built one of the first Agency-wide common software development processes, contributing to the software quality improvement initiative, and has constructed the first-ever software heritage "database" for public consumption.

The CLARAty Team has developed a framework for robotic autonomy that permits use across installations and application to many functions. It can be applied on any type of robotic platform.

The team has encouraged multi installation collaborations by creating a software framework that enables algorithms and methods developed at ARC to be used in flight missions led by JPL. These capabilities also encourage mobility and development opportunities for employees by enabling research concepts and the people responsible to more easily migrate from research to a flight mission environment.