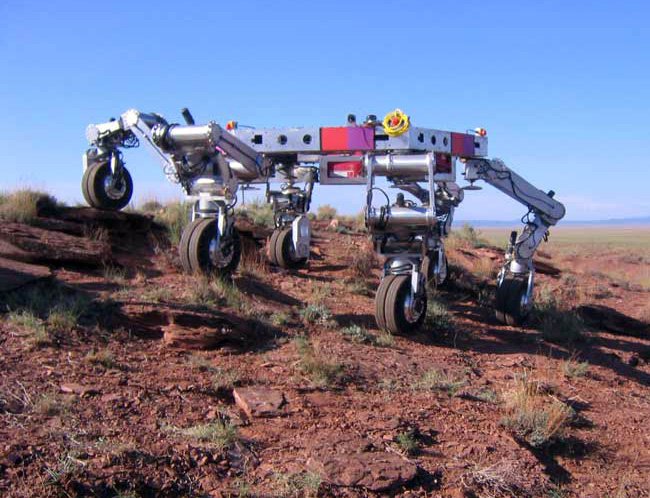 The ATHLETE (All-Terrain Hex-Limbed Extra-Terrestrial Explorer) rovers have successfully completed a series of tests in the deserts of California and Arizona. These tests have shown the systems traversing sand dunes, climbing rocky hills, carrying mock crew habitats, augering into the ground, and scooping soil.

The first set of tests were conducted at Dumont Dunes in the Mojave Desert of California in June of this year. These tests were the first away from JPL, and showed the viability of the new system in natural terrain. The open space allowed for long drives in undulating terrain, while the desert soil permitted testing of digging and augering operations. Nearby erosion channels with steep edges showed the value of ATHLETE's capability to climb step obstacles, including a 1m escarpment.

The second set of tests were completed this past week near Meteor Crater in Arizona. These tests were in conjunction with a multi-center NASA demonstration, described fully here. In these tests, two ATHLETE rovers were employed: one as a carrier of a mock-up pressurized crew cabin, and the other as a rough terrain explorer. The first was lowered to a squat height, and its cabin entered by a suited astronaut going up a small ramp. The second successfully moved up a nearby hillside, while demonstrating both body leveling, and walking capability. In addition, it worked in conjunction with another robot to auger a cable hold into the terrain, which was latched by its partner robot (Centaur, from NASA JSC).

All control of the ATHLETE system was accomplished from an on-site command center called COACH, where operators employed the RSVP and Maestro systems for review of telemetry and issuing of commands.