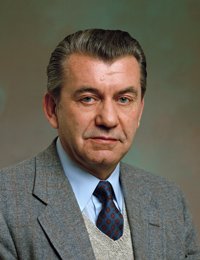 During a 50-years distinguished career in science and engineering, Tony made unique and fundamental contributions to robot modeling and applications, by developing the first robot dynamic algorithm and by enhancing teleoperation systems with automatic functions and novel human-robot interfaces.

Tony received his bachelor’s degree from the Technical University of Budapest, Hungary, and his master’s and doctorate in applied physics in 1963 from Oslo Science University, Norway. After teaching at the Oslo Science University for 3 years, he began working at Caltech in 1966 on a NATO/Fulbright fellowship. He transitioned in 1969 to the Jet Propulsion Laboratory (JPL) where he developed the first dynamic model of robotic manipulators based on the Lagrangian formulation. Prompted by the need of space exploration, he moved to the field of teleoperation, where he developed, and sponsored through NASA Telerobotics program, a number of prototypes aimed at achieving full telepresence in space as well as undersea. He pioneered the development of several innovative robot components such as smart hands with smart sensors and a novel telerobotic system using a general-purpose force-reflecting hand controller for remote robot arm control, which contributed to the birth of haptics research.

During the course of his career at JPL, Tony was awarded 43 NASA innovation awards, 7 US patents, published more than 160 technical papers, and 11 book chapters. He was principal investigator of a flight experiment using a force-moment sensor enhanced hand on the space shuttle arm of the Space Shuttle Columbia in 1994. He was president of the IEEE Council on Robotics and Automation in 1987 and helped move it to Society status, later serving as a member of the Society’s governing board. He received several IEEE awards, including the Pioneer in Robotics and Automation (2004), the Distinguished Service (2007), and the IEEE Robotics and Automation Award (2009) awards, and many NASA awards, including the Exceptional Service Medal and Group Achievement Award (both 1994). An IEEE Life Fellow, Tony retired as a senior research scientist from JPL in 2001. Following his retirement, as an IEEE Distinguished Lecturer, he continued to give lectures and talks around the world on space and medical applications of robotics, two areas of special interest to him. He took an active interest in robotics education and research in Hungary later in his career. For his efforts, he was awarded the Gabor Baross and György Széchenyi awards in 1997 and 1998 respectively. He was also made an Honorary Professor at the Bánki Donát Polytechnic in Budapest in 1999. In his honor, the Antal Bejczy Center for Intelligent Robotics was inaugurated in January 2015 at the University of Óbuda in Budapest.

Tony was a popular figure at the conferences and meetings he attended. His friendly and unassuming personality generated many close friendships and national and international collaborations. He mentored many young researchers who have become leaders in the robotics community today. Besides his passion for robotics, Tony enjoyed classical music and gardening. He was an avid collector of fine art. He was also an active member of the Hungarian community in the Los Angeles area. He is survived by his beloved wife of 58 years, Margit (Margo).